News For You is a prototype for an app, that enables you to find out what's happening outside of your own bubble.

The idea and prototype for the app were created during the UX Design minor at Tampere University of Applied Sciences.

I was primarily responsible for user research and interaction design.

The team was comprised of two other students, who did graphic design and concepting, as well as prototyping and user testing respectively.

This was one of the first practise projects we did together in our university's User-Centerd Design course.

Based on our studies, people want reliable information, and they want it quickly. However, they feel like they can't find it in today's modern media services that are filled with fraudulent information.

People also want to share things with their friends so they feel more connected.

The most essential thing we learned was, that people want reliable information, and for their voices to be heard.

A platform that gathers news from different sources into one place, where users can discuss articles, share them with their friends and vote on the source's reliability.

The user should get reliable information. Every time. 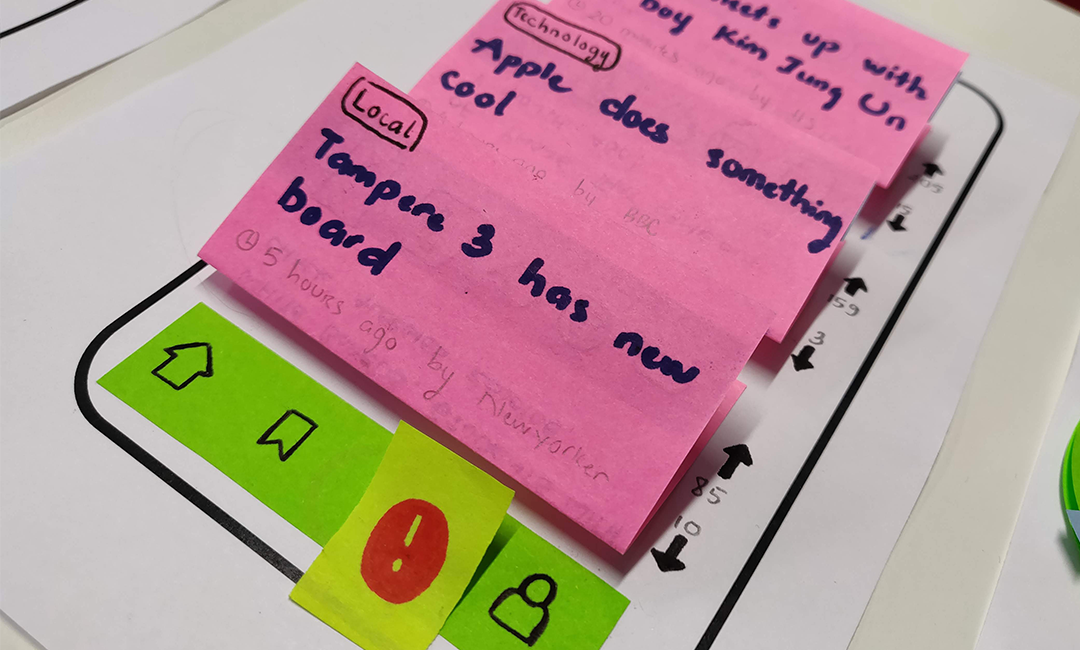 Choosing our target group was relatively easy, since the course's task was to design an app for students.

Choosing our target group was relatively easy, since the course's task was to design an app for students. It's also a group that's relatable and important to us, since we're all studying.

We also picked a category to work with from EYA's competition categories. We picked active citizenship, and digital journalism as our subcategory.

In a "real" project, the target group would of course be defined by the customer's or project's goal.

After picking our target group and category, we conducted user research by interviewing potential users.

After picking our target group and category, we conducted user research by interviewing potential users, who where in this case students. During the interview process, I learned a lot about how much information you can actually get from another person just based on their expressions, and emotional loads.

After our interviews concluded, we gathered our findings into an empathy map, that would later prove itself vital in our design process.

We created our personas based on our user research. We tried to make the personas resemble average users within our target group.

Creating personas really helped us with gaining perspective on our potential users. Everyone's personas were different, but had a few unifying factors, such as them all being students and using their mobile phones as their main source of information.

As our personas were based on real data, it helped us greatly in determining what our goal would be.

One of our personas, Owen Stevens

We created our scenarios based on our personas, and tried to come up with situations where our users might use our app. Based on our scenarios, we also created storyboards to help visualize our data.

Creating the storyboards helped us greatly when trying to figure out the most important features for our users. Some of our key takeaways were portability, speed, reliability and ease of use.

In the ideation phase, our goal was to come up with as many ideas as possible. We did our best to keep a positive flow, and to accept all sorts of ideas, no matter how crazy the might have sounded. That's how all the best innovation is born, of course. We gathered our ideas on a paper map with Post-It notes, and kept iterating for a few rounds. Ultimately, we came up with a solution everyone was happy with.

After that we started building our initial prototype out of paper. Working with paper was a new, and sort of difficult experience at first. We had to take a few shortcuts, but eventually we came up with a solution that would hold up in testing.

In our previous phase, we had already thought of a few things that we wanted to test with real users. Thus, we invited some people from both in, and outside of our class to test our app.

We tried to gather as much information as possible, to get as specific of a view as we could, about what we could still improve and what would need to be changed. We got some extremely vital feedback from our users, that will impact our digital prototyping phase greatly.

Personally, I think testing was the most important step in our design process, along with the user interviews. Real user feedback could never be replaced with any amount of studies. It's important to get out there, and put yourself in the shoes of the user as well.

After finishing up with our paper prototyping, we went ahead and created our final, but still quite rough digital prototype, and did some testing with it as well.

In the end, the vast majority of our test subjects were happy with our prototype, and didn't have problems using it.

The overall feedback for the project and the course was very positive.

Some notes were given about design choices, eg. some icons were different to what the users expected.

I grew as a designer and better understood how to design and build user-centered services.

But, the most important was to understand the user-centered design process: the failures, the successes, and the in-betweens.


Based on this project, I actually created another site called The UX Handbook.

It was built for my user-centered design course, but contains useful information about the UX process. Check it out if you want to!